"I want as game protectors men of courage, resolution and hardihood, who can handle the rifle, axe and paddle; who can camp out in summer or in winter, who can go on snowshoes, if necessary, who can go through the woods by day or by night without regard to trails."

The books of the Warden Force series are not novels, but collections of award winning short stories spanning seven volumes with more to come. These stories relate the true adventures of some of the toughest, smartest and most relentless pursuers of wildlife-destroying outlaws on earth.

Click on any of the covers below for free previews! 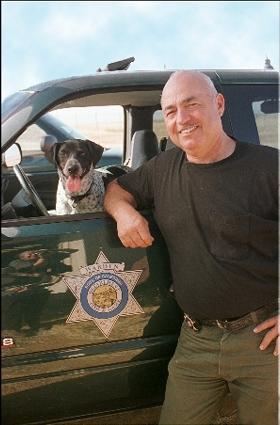 Award winning author Terry Hodges is the creator of the WARDEN FORCE series, true adventure stories of some of the finest game wardens in the world and the wildlife-destroying outlaws they pursue. Having been a tireless and highly experienced warden himself for over three decades, Terry writes with the special authority found only among those who have worn a badge on behalf of wildlife.
For most of his 30-year career, Terry was a California Department of Fish and Game patrol lieutenant, supervising wardens in two Northern California counties. But unlike most supervisors, he was never content behind a desk, much preferring field work and leading his wardens from the front. He was a pilot, flying hundreds of hours, mostly at night, spotting violators from the air and directing his wardens in to make the arrests.
Terry’s all-true stories take place mostly in California, which has more diversity of wildlife and wildlife habitat than any other state and is second only to Alaska in its vast expanses of uninhabited wilderness.
Terry has received national writing awards and was three times chosen Writer of the Year by the Outdoor Writers Association of California (OWAC). In addition to his seven books, he has been a regular contributor to the Department of Fish and Game's magazine, OUTDOOR CALIFORNIA. He served four years in the U.S. Coast Guard and received his Bachelor of Science degree from California State University at Sacramento.
In 2006, he was inducted into the California Outdoor Hall of Fame.