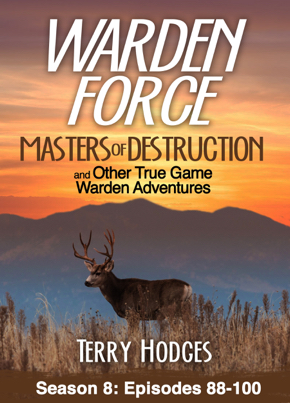 Audiobook on Audible Available on Amazon

Some Kind of No Good: A warden's exceptional skill and some blind luck combine for an interesting outcome.

Threats and Promises:   A search warrant search of the home of two deer poachers yields surprises, plus a brush with a bad cop.

An Extra Set of Eyes:  An aging game warden lieutenant, a few days following knee surgery, ends up being far more than an observer during the action-packed, nighttime arrest of salmon poachers.

Operation High Hog: A large team of wardens pit their wits against some of the worst deer and pig poachers in California history.

Primal Instincts: Wardens pursue the puzzling case of two deer poachers who kill far more deer than they could ever use.

Combat Fishing:  An old warden, his days of foot-chases far behind him, employs stealth and trickery to capture two fleet-footed young salmon poachers.

Masters of Destruction:  A fearless and horribly destructive ATV-riding deer poacher repeatedly evades wardens and officers of other agencies before finally going down hard.

The Ghosts of Tipper Slough: A wealthy farmer pays far more than money when he ignores a warden and destroys a particularly wonderful wetland.

Leonard's Bad Word:  Does a warden known for never using profanity have a slip-up over his radio one dark night?